I’ve made 2015 about raising money for Macmillan by doing triathlons and more, and would love for you to find out why!

How I’m coping with being thrown in at the deep-end.

Jul 2 • Life and everything else

Next week I kick off my new job at Fueled and I’m giddy with excitement, but this is the most nervous I’ve been in quite some time. The biggest fear, certainly for me, is always “will I be good enough?”. Now, I’d like to think that I’m in a position to be starting because they reckon so, but I can be irrational right?

The past few weeks has seen me go from Sass-less (pun kind of intended) to smashing at keys in the command line. It’s really terrifying! I still have no idea what I’m doing, but it’s working.

Having read Jake’s advice to a design graduate it made me realise that I have no idea where the last year went, but it also helped me see that I’ve already done a fair bit of scary stuff this year.

“Getting out of your comfort zone is the best way to progress in your career, and what fun is monotony?” Jake Giltsoff

He also makes some great points about asking for help. Before I properly started interacting with the awesome guys and girls in this industry I found it difficult to admit I needed a helping hand and, sometimes to my detriment, I’d just go it alone (which almost never* worked). So I started asking, and people started answering; hell, no-one knew what they were doing when they started so most people have jumped at the opportunity to pass on knowledge.

None of this new stuff will ever get any less scary; all I can do is better set myself to embrace it, and let it push me outside of my comfort zone.

And if that fails, I’ll become a loaf instead. 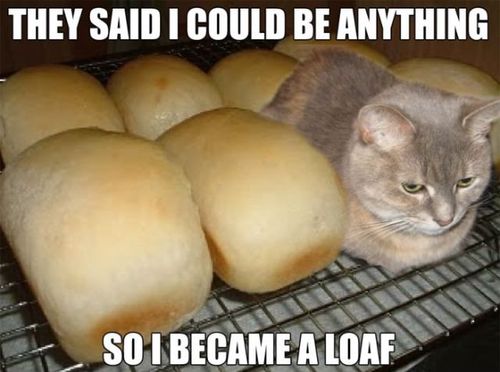 Why not read another?